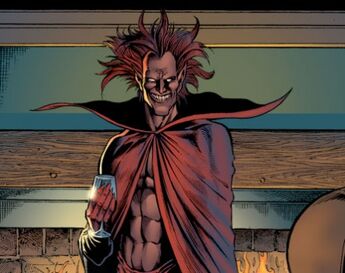 Mephistopheles, (or Mephisto for short) is one of Ghost Rider's main enemies and is apparently the particular devil who gave Johnny Blaze his Rider powers. He is sometimes referred to as Satan in the comics, though this designation sometimes applies to other devils such as Marduk Kurios, Satannish, and Thog (see article on Satan for further details).

He is also the father of Blackheart and responsible for many of Ghost Rider's problems. He created the anti-hero Suicide, and helped awaken the power of Ghost Rider's future ally Vengeance.

Major Events in the ComicsEdit

- Gets Naomi Kale to change into Ghost Rider, thus killing her. [1]

- Makes deal with Johnny Blaze to spare the life of Crash Simpson from a fatal disease. Crash does not die - of the disease, but does die of a failed motorcycle stunt. The bargain fulfilled, Mephisto comes to claim Blaze's soul, but is forced back by Roxanne Simpson. However, Mephisto sends the demon Zarathos to posses Blaze, turning him into Ghost Rider. I. [2]

- Reveals that the Ghost Rider possessing Blaze is Zarathos, a being he defeated and enslaved in antiquity with the help of Centurious. Ever since then he has used Zarathos to possess various souls for his own amusement. [3]

- Makes a bet he made with the Beyonder to keep the universe alive for another day. Zarathos was breifly freed from his prison to torment Spider-Man. [4]

- After the Dan Ketch Ghost Rider is hit by a beam of mystical energy from the Wrecker, Mephisto appears. This worries Loki, who pays Mephisto a visit and mentions that this new Ghost Rider resembles John Blaze's Ghost Rider. Mephisto assures him it is merely a coincidence and that he visited Earth only to view this new Ghost Rider with his own eyes. When Loki first appears, Mephisto is looking at the Soul Crystal that contained Zarathos and Centurious. (Thor 429-430).

- After tormenting Blaze in Hell for a while, he uses Blaze as a means to physically enter the mortal realm. This splits him into 666 pieces that Ghost Rider must hunt down and destroy. [5]

- Claims that Blaze is possessed not by a demon, but by an angel. Some nearby angels apparently confirm this. [6]

In the Ghost Rider movie, Mephisto is played by Peter Fonda. He comes to earth is human form: a blond man wearing a black cloak and dark gloves and carrying a silver cane with a glass skull on its tip that unleashes his various powers when he bangs it on the ground.

Retrieved from "https://ghostriderarchive.fandom.com/wiki/Mephistopheles?oldid=2944"
Community content is available under CC-BY-SA unless otherwise noted.