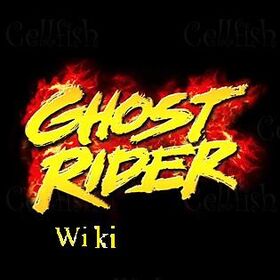 Ghost Rider is the name of an anti-hero, known variously as The Devil's Bounty Hunter, The Spirit of Vengeance, or Flame-head (among many other names). 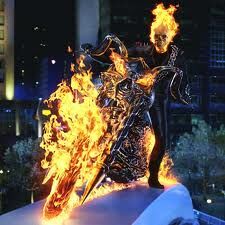 The first and original Ghost Rider, John Blaze, was a professional stunt cyclist. He was adopted early in life by a man named Crash Simpson, who had a smoking problem. After smoking for so many years, Crash was diagnosed with lung cancer and presumed to die.

In an effort to save his stepfather, Blaze unknowingly sold his soul to Mephistopheles, or Mephisto for short. Although Crash obtains his health, he quickly dies in a stunt. Enraged, Blaze attempts to run away, but Mephisto arrives, claiming that his soul was his and that he wasn't going anywhere.

Mephisto then transformed Blaze into the Ghost Rider to defeat a Demon known as Daimon Hellstrom & sent him back to Hell. Succeeding, Blaze continues to serve Mephisto during the night.

Danny Ketch was walking in the streets of New York City one day when he was attacked by a mob of gangsters. Terrified, he fled to a dump, where a found a magical sigil. Upon touching the sigil, he suddenly obtained the powers of the Ghost Rider.

Although both Riders have basically the same powers, there are significant differences between their abilities, as follows:

The common theme of the Ghost Rider is a human host who transforms into a flaming-headed motorcyclist with supernatural powers. When riding their bikes, the vehicles can travel faster than conventional motorcycles and can maneuver impossible feats such as riding straight up a vertical surface or across water.

Initially when transformed, Blaze's motorcycle would simply catch fire. Later, he could create a cycle made of pure flame (hellfire). Hellfire is a supernatural flame which typically burns the soul and not the body, but also could be used as regular flame. Projecting hellfire as a weapon is his main form of attack. He also possesses supernatural strength and resilience, as well as almost total invulnerability to physical damage. Any damage he does take is quickly recovered, as Ghost Rider is made of pure hellfire, which he can use to immediately regenerate any lost limbs or holes in his body

For a time, when Daniel Ketch was the Ghost Rider, Johnny did not have his typical powers. Instead, he wielded a shotgun that fired mystical force-blasts and rode a mystic motorcycle (both somehow empowered by exposure to Ketch's hellfire).

In the newest incarnation of Johnny Blaze as Ghost Rider, another main weapon in his arsenal has been his chain, which was first used by the Dan Ketch Ghost Rider. The chain, much like the rest of Ghost Rider, is made of hellfire given a solid physical substance. Ghost Rider can control the exact movement of the chain with his mind, allowing it to do things normal chains cannot, such as reach vast distances and wrap around enemies without fail. The chain is seemingly unbreakable. This incarnation's most powerful weapon is the "Penance Stare". When he locks eyes with his victim, he can make them experience all the pain and suffering that they have inflicted on everyone in their lifetime, permanently damaging their soul in the process.

The entity which is the current source of Ghost Rider's power has been described by , the Sorcerer Supreme of Earth, to possesses sufficient mystical power to challenge the Green Scar incarnation of the Hulk, as shown in .

The Ghost Rider is empowered as a result of the magical properties of a mysterious emblem affixed to a large and powerful motorcycle possessed by Daniel Ketch. This gives him the ability to transform into a mystic being which appears as a flaming skeleton dressed as a motorcyclist, and provides him with superhuman strength, speed, stamina, and durability. As the Ghost Rider, Ketch can use his "Penance Stare" — the ability to cause others to experience a level of emotional pain equivalent to that which they have caused others as a result of illegal or immoral activities. When in close combat, he locks eyes with his victim and makes them feel all the pain that person has ever inflicted on anyone in their lifetime. This, of course, has several weaknesses. If high on drugs like cocaine, or if the person is blind, or if he cannot make eye contact due to the victim having more than two eyes, Ghost Rider's Penance Stare cannot function. An attempt to use the Penance Stare on the symbiotic being, Venom, resulted in Ghost Rider being knocked unconscious. It also cannot work on souless beings such as Centurious.

As the Ghost Rider, Ketch uses a length of heavy chain approximately 3 feet (0.91 m) long which possesses magical properties. For instance, when it is thrown it is able to separate into individual links which behave like shuriken, later reintegrating and returning to the Ghost Rider's hand. The chain can grow in length, is supernaturally strong, and can transform into other weapons such as a spear. He can also spin it fast to be used as a drill.

The common theme of the Ghost Rider is a human host who transforms into a flaming-headed motorcyclist with supernatural powers. When riding their bikes, the vehicles can travel faster than conventional motorcycles and can maneuver impossible feats such as riding straight up a vertical surface or across water. In a one-shot comic featuring Doctor Strange and the Daniel Ketch/Noble Kale version of Ghost Rider, it was shown to be capable of riding on nothing but air. This was repeated shortly after Kale started to regain his memories, causing him to alter his suit by sheer force of will, and created an entirely new bike.

When empowered, Ketch's motorcycle undergoes a more radical transformation. It changes from a conventional looking motorcycle to one that appears both powerful and high-tech. Along with flaming wheels, the bike includes a shield-like battering ram on the front. Like the Blaze/Zarathos version, this Ghost Rider's bike was capable of incredible stunts, such as driving up sheer walls, across water, and in at least two known instances, through the very air itself. Ghost Rider also created two other bikes that he could utilize in the same manner as the one he normally rode, one out of necessity when Blackheart stole the original in a crossover graphic novel that brought together Ghost Rider, Wolverine, and the Punisher, and again in the regular series as a spare in case something made him unable to get to his regular cycle. The latter would wind up in the hands of Johnny Blaze.

He has displayed some other powers briefly, like the ability to summon a wall of flame. In the beginning, Ketch could only transform "when innocent blood was spilled" and had to touch the gas cap of his motorcycle. Later it was revealed that this was only a psychological limitation he himself caused, and which Daniel later overcame.

Unlike Blaze, the Ketch Ghost Rider possessed a Penance Stare which made the target experience all the pain and suffering they've caused others. He possessed Hellfire powers similar to the Zarathos/Blaze version, but he also had the ability to destroy the undead, and was supposedly Marvel's incarnation of the Angel of Death/Judgment, which detailed the supposed origins of the Noble Kale version of the Ghost Rider.

In addition, Ketch and Noble Kale actually worked together to an extent, unlike Blaze and Zarathos, who battled for dominance and control over their shared body. Kale had a compassionate side and while there were times that he seemed tempted to simply take over completely, he refused to do so, though he felt anger at condemning Daniel to only being able to live his life out half the time, while he dominated the other half. Kale and Ketch, like Blaze and Zarathos, could sometimes communicate through dreams, and in at least one issue communicated via messages written on a mirror in lipstick.

In February 2007, a Ghost Rider film was released, focousing on Johnny Blaze as the Rider. It starred Nicolas Cage as Blaze/Ghost Rider.

He appeared in a tax commercial on TV as Ghost Rider, whom is lit on fire and later sets the sprinklers off as a joke.

The Rider appears in various cartoons, commonly Spider-Man and His Amazing Friends and Incredible Hulk.

Community content is available under CC-BY-SA unless otherwise noted.
Advertisement